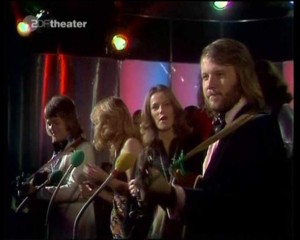 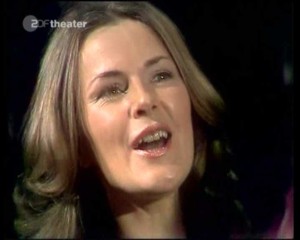 Release status: This programme has not been included on any officially released video or DVD

Disco was a pop music programme that aired in Germany on the ZDF network from 1971 to 1982. It generally aired on the first Saturday of each month at 19:30, with each show running for 45 minutes. 133 shows were produced. The show was hosted by German actor and comedian Ilja Richter. The show focussed on chart hits current at the time of airing, giving about equal airtime to international pop music and German Schlager. Despite its name, it did not particularly focus on disco music although it featured many disco hits as long as they were chart relevant. (The name of the show was devised before disco as a musical style existed).

Still called "Björn, Benny, Agnetha and Anni-Frid", Frida's friend Inger Brundin stepped in for Agnetha as she was heavily pregnant and did not want to travel abroad in her condition.

Here they performed People Need Love. The presenter was Ilja Richter, as always, who joked around in between each guest appearance. Apparently every Disco show from 1973 till 1976 was filmed in Hamburg and then moved to Munich in February 1976.

According to the fanzine Intermezzo (issue no.19), this appearance was recorded before Christmas 1972 - yet the Swedish newspaper, Expressen, dated 16 December 1972 stated that they will be “doing TV for a couple of days in Hamburg in January”.  However, Benny & Björn were writing Ring Ring on Viggsö on 6 January 1973.  So if Expressen is correct and the broadcast date of 6 January is also accurate, then the recording must have taken place at some point during 1–4 January 1973.

This was part of a promotional tour of Austria (Spotlight), Netherlands (Popzien) and Belgium (Ziet u er wat in?) and Denmark (Television City and Sommerlørdag) in the first few months of 1973.

The running order of guests on the show was:

This performance was also broadcast on ABBA Kultnacht on 2 November 2002, ZDF, Germany.

The way Inger constantly avoids eye contact with the camera

Got any information to add?
Spotted a mistake?
Contact me at [email protected]